Xenomai is a useful tool for running real-time tasks on an embedded Linux platform such as the Beaglebone black. That comes in handy when building robotics applications.

A standard Linux installation can already be enough if you want to be a soft real-time application, with latency in the order of magnitude of a millisecond you could probably spin a loop at 100Hz easily. Xenomai allows you to go the extra mile: once installed, it runs a separate kernel from the Linux one that is capable of bringing latency down to the microsecond. Also the jitter decreases drastically thus allowing hard real-time applications to be built.

For the last few days, I’ve been trying to install Xenomai on a Beaglebone black. I found a few links but a lot of them were outdated and didn’t work for me as they were 1 2 3. So here’s my adaptation or synthesis of all that.

There are two ways you can install Xenomai on the Beaglebone black:

I discovered this method thanks to the Debian for Beaglebone black page 4.

1. Install Debian or Ubuntu on your Beaglebone

If you already have a recent Debian installed on your Beaglebone black, you can skip this step.

For Debian use this image:

For Ubuntu use this image:

Insert your SD card, for me it’s under dev/mmcblk0

Once it’s done, remove the SD card from your computer and put it in the Beaglebone black. Press the S2 button while powering it with a 5V 1A minimum power source (protip: use a phone USB charger). The four blue user LEDs will light up one after the other, once all four are lit you release the button. The LEDs will start lighting in a K2000/Cylon style. Once all four LEDs are off, you can unplug it and plug it on your computer. Now you’re ready for the next step.

SSH to your Beaglebone

Then update and update the kernel

Now reboot and SSH back on the Beaglebone

Build and install it

I have only tested this with Debian.

The two main drawbacks of this method are:

You can test Xenomai by running this as root 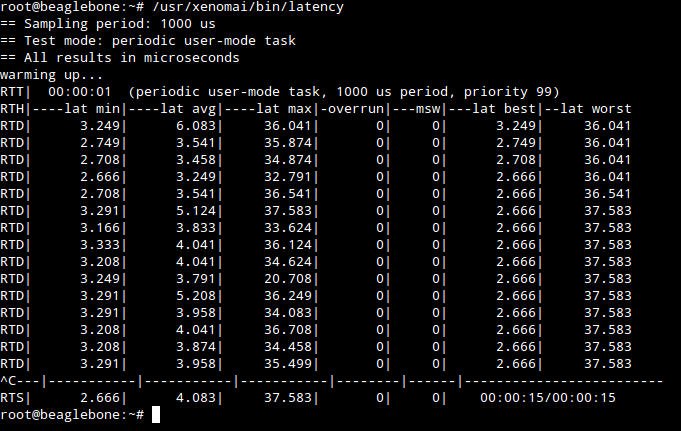 You’ll notice the latency and jitter are - as expected and promised - in the order of microseconds. Bear in mind that this is just a test and doesn’t reflect the performance of Xenomai under high CPU loads. We shall test that later.

You can go on and try other stuff under /usr/xenomai/bin/. Or you might try using the Xenomai userspace API 5 to build a real-time application, I know that’s one thing I’ll be exploring.