Becoming a movie star isn’t easy: acting isn’t enough! The robots will experience it this year, and will have to show us their multiple talents in an extraordinary shoot.

They have several tasks to do:

Debra is our biggest robot. It has two arms, as each year, allowing it to grab and stacks the spotlights, as well as close the clapperboards.

Debra also has two cameras to see around it, which sadly wasn't implemented.

Caprica is our smaller robot, named after the Battlestar Galactica TV series. Its also capable of stacking the spotlights but it was mostly designed to climb the stairs using caterpillars. Caprica also has a simple system to drop the carpets once it is on top of the stairs.

In 2014 we reached the maximum number of motors that our FPGA-based design could handle. We also wanted to get rid of Altera’s tools, which were too complex and too constraining for our use.

We decided to try ST’s STM32 ARM based microcontrollers since some of our team members had a lot of experience with those. A big part of the summer was spent hacking on those to make something work and at the release of the rules we knew we would switch to those.

We wanted to drive at least 14 motors with quadrature encoders and the more the better. Since it was obvious that no microcontroller could handle it we decided to switch to a new paradigm: each motor would have its own control board which would be connected to a network. This design would allow us to horizontaly scale the number of motors to any number we wanted, provided we respected the network’s maximum bandwidth. Sadly it also meant that the board should be small: we had a limit of 25 by 35mm.

We studied a bit the various field busses that we could use:

The embedded PC delegates realtime tasks to a master board which serves as a gateway between the CAN bus and a standard Ethernet/IP communication. This board is also based on an ARM microcontroller.

Running a complex application such as a robot requires complex network functionalities such as adressing, packet fragmentation and service requests (client server architecture). While CAN provides some networking primitives such as message IDs or bus arbitration, it lacks those high levels concepts. Typically this is solved by adding a protocol between the CAN network and the application, such as CANopen, CANaerospace or DeviceNet. We decided to go with a CAN protocol specially designed for small robots and UAVs called UAVCAN.

This protocol provides everything needed to implement a messaging system around CAN. The complete list of features is available on the protocol website but key features for us were:

This board is Open Hardware licensed under a Creative Commons license. You can find all the details about it in the Github repository 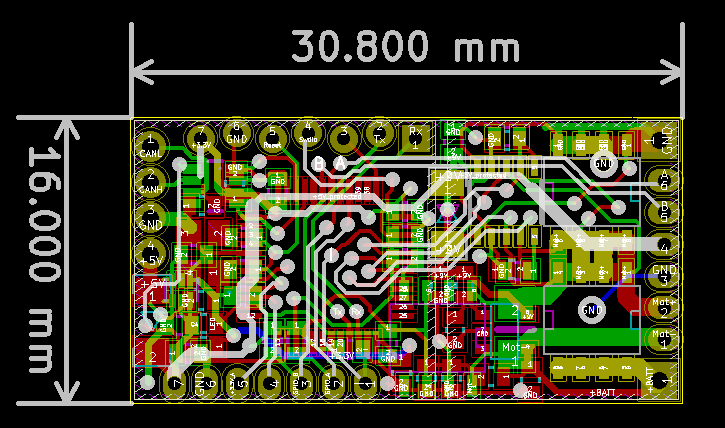